Fr Mathew Kochupurackal, a priest of the diocese of Kothamangalam, was born on 05 December 1963 as the third son of Mr K.V. George and Mrs Mariyakutty George at Kadalikad near Muvattupuzha.  After four years’ pastoral ministry as assistant parish priest in three parishes, he was se 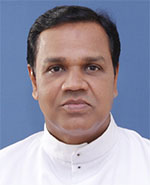