Melbourne Diocese Catholic congress next executive committee will be in Chancery(Greenvale,Vic) on November 9th. Inviting catholic congress representatives from all Parishes and Missions for this meeting. 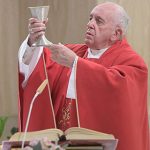