The theory that well-being will automatically flow down to everyone from the riches of the few is ‘a lie,’ Pope Francis said.

The beatitudes show the way, he said, because they show that holiness doesn’t concern just the soul, ‘but also the feet — for going toward our brothers and sisters, and the hands — for sharing with them.’

May the beatitudes ‘teach us and our world to not be wary of or leave at the mercy of the ocean waves those who leave their land, hungry for bread and justice; may they lead us to not live in excess, devoting ourselves to the advancement of everyone, kneeling with compassion before the weakest,’ he said 15 June.

This approach, he said, comes ‘without the easy illusion that, from the lavish table of the few, well-being automatically ‘rains down’ for everyone,’ he said.

The pope’s remarks came in an address to people taking part in a national congress of an Italian federation of expert artisans and craftsmen known in Italian as ‘maestri.’

Pope Francis reaffirmed how important work and making a living are for each person, but he noted how so many are still excluded from today’s ‘economic progress’ and are, therefore, deprived of future prospects and hope.

‘The first and most fundamental human right, for young people most of all,’ is hope, he said, ‘the right to hope.’

A community that does not concretely promote jobs and cares little for those who are excluded from employment opportunities ‘condemns itself to atrophy’ and will see increasing inequalities, the pope said.

On the contrary, a society that is guided by a spirit of subsidiarity, that seeks to bring to fruition the potential of every man and woman ‘of every origin and age, will truly breathe with full lung power and be able to overcome even the biggest obstacles.’

To do this, work and life must be lived ‘like a mission’ and love for one’s brothers and sisters ‘must burn inside us with ‘spiritual fuel,’ which, unlike fossil fuels, never runs out, but increases with use,’ he said. 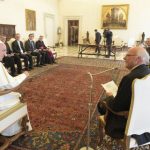 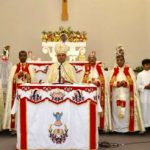